How will the Prophet Jesus (pbuh) meet up with Hazrat Mahdi (pbuh) when he returns to earth? 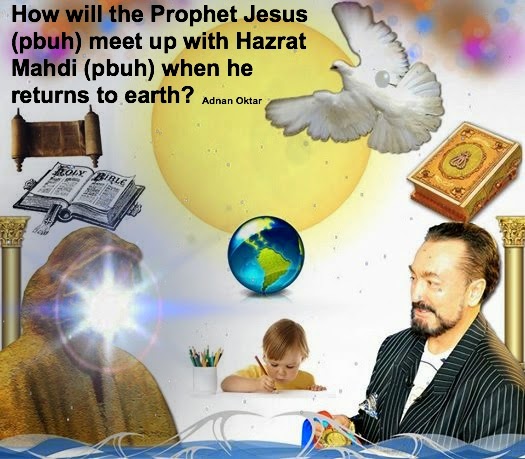 How will the Prophet Jesus (pbuh) meet up with Hazrat Mahdi (pbuh) when he returns to earth?
Excerpt from Mr. Adnan Oktar's Live Conversation on A9TV dated July 31th, 2014

- You had a dream of the Prophet Jesus?

Adnan Oktar: Yes, I did. I do not usually dream much. I dreamed of Bediuzzaman one time. I have never dreamed of the Messenger of God (pbuh), but I hope that God will permit me to do so, insha’Allah.

I dreamed of Jesus the Messiah very clearly. He was in a large crowd of people. He was slightly taller than average, with broad shoulders and a European appearance. He was very handsome and smiling. He had blond or light brown hair. His hair was shoulder-length and straight. He was very polite and European-looking. He had a clean smile and a dignified appearance.

He did not say, ‘I am that person.’ I did not ask, ‘Are you that person?’ I did not ask if he was Jesus, the Messiah. I went up to him to show I had recognized him. Masha’Allah, I said. He came and embraced me. Then I woke up and cannot remember anything else.

His nose was long and elegant. His lips were exceedingly straight. I saw him very clearly. I could draw him from memory, I remember him that clearly. His eyes were colored. He had a deep but refined voice. But our talk was very short in my dream.

His followers also came up and smiled. ‘Look who has come,’ they said. I recognized him the moment I saw him, insha’Allah.

- Could you recognize the Prophet Jesus from among hundreds of people?

Adnan Oktar: Prophets’ faces are very different. It is impossible not to recognize them. For anyone with a normal conscience, anyway. A believer will at once see that intelligence and depth in the Prophet. But  Bediuzzaman says that not everyone will recognize Jesus the Messiah. The Prophet Jesus (pbuh) will go among the people when necessary, but people will not recognize him and will not imagine he could be the Prophet Jesus.

They will not recognize him as they see from a bit of a distance and do not pay proper attention. But if someone of good conscience speaks to him face to face he will immediately recognize something extraordinary in his speech. But a coarse person of no conscience will not, of course.

A person of good conscience will immediately recognize him. The Mahdi is actually easy to identify, but because people’s consciences are closed off in the End Times, and because of the spell of the antichrist, they will not recognize him. The world will literally be hypnotized. The antichrist will cast a spell over the whole world, and that spell will prevent people recognizing him.

That spell will not be lifted easily. It can only be lifted through faith and will. It has an intense effect. It makes people lethargic and distracts them. It puts them to sleep. These are things that enhance the value of the test, but if someone is heedless, he may become totally distracted by that spell.

Some under that spell will always be lethargic, self-interested and apathetic. He will wander round as if he were drunk. We can see that lack of attention in many people’s faces. Many people’s expressions are distracted, because of the effect of that spell.

Many Muslims are now asleep. Scholars are also sleeping. Scholars hold a meeting, for instance, and the greatest scholars in the Islamic world all come together. They hold their meeting, but in a comatose state.

People were sleeping like logs under the effect of this spell at the “Awakening of the Islamic World” conference." Not one talked about Islamic Unity, they engage in political gossip, but that is the really important thing. They never get onto the subject of Islamic Unity, which God makes an obligation by His command.

Is there a religious law to which Hazrat Khidr is bound?

Adnan Oktar: His followers also act in the same way.

- Will Hazrat Khidr have followers?

Adnan Oktar: Of course. He always has a group.

- Will the followers of the Prophet Jesus have their own special features deriving from him? Will you recognize them if you see them?

Adnan Oktar: Of course. God will gather the cleverest and most intelligent Christians in the world around him. But they will be very uneasy. They will not let on who they are in order to prevent any harm befalling the Prophet Jesus.

Adnan Oktar: Of course they are at work. But their work is not the kind we are familiar with. They are engaged in political activity.  Bediuzzaman sets the matter out. They will concentrate on politics. But they will not draw attention to themselves as they do so.

- Will they recognize Hazrat Mahdi?

Adnan Oktar: Jesus the Messiah will know him, because he acts through revelation. But he will not say anything.

- Will Hazrat Mahdi and the Prophet have a protector?

Adnan Oktar: Of course. The Prophet Jesus will come to pray (as revealed in the hadiths). He can behave like that because he knows he is secure. But there will not be a ring of guards round him.

Normally his followers would be highly attentive to the Prophet Jesus now. They will be very worried in case anything should befall him. Because if the Prophet Jesus is questioned, it will emerge that he has no parents and is not a normal person. He may be accused of a serious crime such as having a false identity.