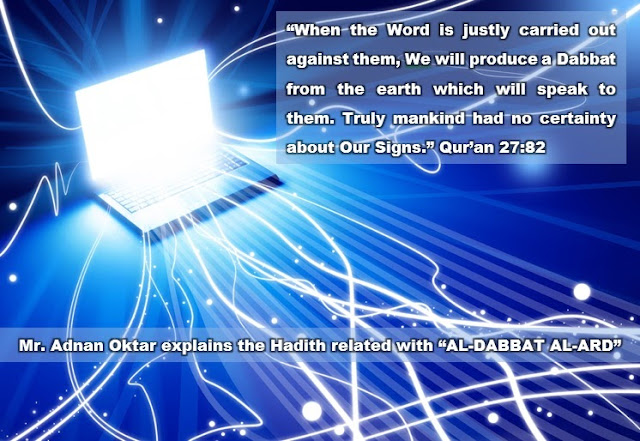 There is no reference in the Qur’an to state that Dabbat al-Ard is female or male. I mean God lays stress on it openly when there is such a thing to emphasize.  Commands cannot be derived from the Qur’an through such insinuations. What does Almighty God say?  “When the Word is justly carried out against them, We will produce a Dabbat from the earth which will speak to them. Truly mankind had no certainty about Our Signs.” When people forget about religion in the End Times, when Darwinism and materialism is widespread, when irreligiousness is widespread, when it is very difficult to persuade people, when religion is estranged, We will produce a creature originated from the earth.

A “Dabbat” is something that moves. For instance when an apple decays, that decay becoming moldy and decaying even further is called al-dabbat as well. The spreading of drinks in the human body is also called “al-dabbat”. I mean things that is hard to see with naked eye, things that make slow movements are called “al-dabbat”. For instance the slow movement of an ant or a machine, the slow movement of a car. Dabbaba, dabbat means something that flounders, something that moves, something that moves slowly.
Our Prophet (saas) explains al-Dabbat al-Ard; “When the dabba speaks the whole world hears at the same time.” Only from this statement we understand that it is the internet, that it is a computer. That is because look;
“He speaks at a place and the whole world hears,” our Prophet (saas) says. How could that happen? That is how it happens.
Our Prophet (saas) says “its face is like the face of a human.” When you turn it on you see the face of a human there. Human face, probably the face of Hazrat Mahdi (pbuh) will be seen on Dabbat. That is because;
He says; “It is bearded.” I mean we will see the face of Mahdi (pbuh) in dabbat. He refers to that and says;
"Al-Dabbat is on and under the ground. It has arms, brunches and tails ten thousands of kilometers long," our Prophet (saas) says. What is this? Internet cables. Right? It is said that Dabbat Al-Ard covers the whole world like a spider web. And look, pay attention;
“It enters every house.” There is internet in everyone’s house. Dabbat Al-Ard will enter the houses in the US, it will enter the houses in Istanbul.  Our Prophet (saas) says that “it will enter everyone’s house simultaneously.” Is it that difficult to understand this?
“When Dabbat Al-Ardh speaks everyone listens,” says our Prophet (saas). Since this is the case, since it enters everywhere.
“Its head touches the clouds.”  There is internet even in heights that planes reach
“It goes down under the ground,” our Prophet (saas) says. There is internet under the ground as well. For instance there are military bases under the ground and there is internet access there as well.
“There are all kinds of colors on it,” our Prophet (saas) says. When you turn on the computer, when you turn on the internet there are all kinds of colors on it. It is impossible to not to understand.
“It has a seal on its hand and it seals everyone. That seal appears everywhere,” our Prophet says. That seal is the seal of our Prophet (saas). The seal that writes Mohammad is the Messenger of God.
“It marks Muslims,” our Prophet (saas) says. That seal would be seen in the houses of Muslims. The seal of our Prophet (saas) is indeed seen everywhere.
“The face of infidels will turn all black,” says our Prophet (saas). I mean they would be suffocated, they would be disturbed. It means when they see that image, that writing, that speech they will be disturbed.
“The faces of Muslims will shine brightly, they will be radiant,” it is said. When one reads it, Muslim’s heart will be gladdened. Consequently it has nothing to do with being “female” or “male.” We understand that it is a dabbat originated from the soil in the End Times.
2013-06-28 04:05:40