With the meteors falling upon Russia, Allah has sent another spiritual sign. Such incidents will become frequent, portents will be more frequent. People will start to look for Mahdi (pbuh). They will understand that there is something unusual going on. They will say that Allah wants something. That He has a goal and they will go find the Mahdi (pbuh) and find Jesus Messiah and thus the Unity of Islam will prevail in the world.
(A9 TV; February 15th, 2013)

After the year 1980 there has been a concentration on two matters. One of them is about the earthquakes; the number of the earthquakes occurring after that date is twenty-thirty times more than the number of the earthquakes that took place in the history of the world. The meteors have almost formed a cloud. Previously they were only a few and easily could be counted but now they started to enwrap the world like a cloud. These are all signs of the system of the Mahdi.
(A9 TV; February 15th, 2013)

The hadiths state; "Hazrat Mahdi (pbuh) appears with a cloud on his head, with a halo." This also refers to the halo over the world. Meteors have wrapped the world like a turban, in the form of a halo. That is because this is the world of Mahdi, by the Will of Allah.
(A9 TV; February 15th, 2013)
By Faisal Farooq - February 21, 2013 No comments: 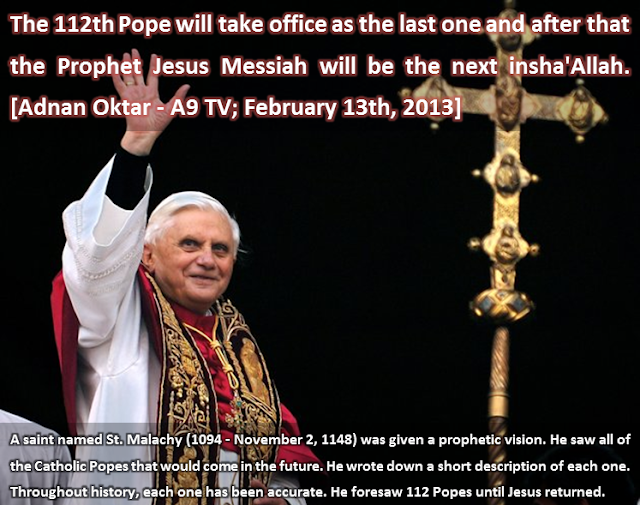 Saint Malachy (1094 - November 2, 1148) was known as great prophet. While in Rome in 1139 he received a vision showing him all the Popes from his day to the end of time. According to these prophecies, only two Popes remaining after John Paul II.

St. Malachy was reported to have possessed the powers of levitation, healing, and clairvoyance. While on his way to the Vatican to assume the post of papal legate for Ireland, he fell into trance and saw a line of papal reigns stretching from the successor to Innocent II and extending through centuries to the last of the line, identified as Peter of Rome. Malachy assigned short descriptions in Latin to each pope when he committed his vision to paper. These mottoes usually refer to a family name, birthplace, coat-of-arms, or office held before election to the papacy. Some of the phrases are multiple prophecies, written with ingenious word play.

Through the centuries, his prophecies have turned out to be amazingly accurate, even prophesying the date of his death. In all, 112 popes and their characteristics are listed from 1143 to the alleged end of the world, or perhaps religion as we know it, when truth is inlay revealed about human creation and destiny.
Saint Malachy's final words were: "Rome, the seat of the Vatican, will be destroyed and the dreadful Judge will judge the people."

Prophecy of the Popes is a list of 112 short phrases in Latin. They purport to describe each of the Roman Catholic popes (along with a few anti-popes), beginning with Pope Celestine II (elected in 1143) and concluding with a pope described in the prophecy as "Peter the Roman", whose pontificate will end in the destruction of the city of Rome.

1. The Burning Fire. PIUS X. 1903-1914. This Pope showed a burning passion for spiritual renewal in the Church.

2. Religion Laid Waste. BENEDICT XV. 1914-1922. During this Pope's reign saw Communism move into Russia where religious life was laid waste, and World War I with the death of millions of Christians who were carnage in Flanders Field and elsewhere.

3. Unshaken Faith. PIUS XI. 1922-1939. This Pope faced tremendous pressure from fascist and sinister powers in Germany and Italy, but he was an outspoken critic of Communism and Fascism which enraged Hitler.

4. An Angelic Shepherd. PIUS XII. 1939-1958. This Pope had an affinity for the spiritual world and received visions which have not been made public. Peter Bander says Pius XII "has emerged as one of the great Popes of all time," and he "was in the truest sense of the word an Angelic Pastor to the flock..."

5. Pastor and Mariner. JOHN XXIII. 1958-1963. John was a pastor to the world, much beloved, and the Patriarch of Venice. The connection to "mariner" is thus remarkable.

7. Of the Half Moon. JOHN PAUL I. 1978-1978. John Paul I was elected Pope on August 26, 1978, when there was a half moon. He reigned 33 days, that is, about one month, when he died, although many think he was murdered. He was the 109th Pope - is "De Medietate Lunae" (Of the Half Moon). The corresponding pope was John Paul I (1978-78), who was born in the diocese of Belluno (beautiful moon) and was baptized Albino Luciani (white light). He became pope on August 26, 1978, when the moon appeared exactly half full. It was in its waning phase. He died the following month, soon after an eclipse of the moon.

8. The Labor of the Son. JOHN PAUL II. 1978-2005. Pope John Paul II was the most traveled Pope in history. He circled the globe numerous times, preaching to huge audiences everywhere he went. He survived an assassination attempt. He has written a book which has enjoyed a large circulation. Like the sun which never ceases to labor and provides light daily, this Pope has been incessant. He was born on May 18, 1920. On that date in the morning there was a near total eclipse of the sun over Europe. Prophecy - The 110th Pope is "De Labore Solis" (Of the Solar Eclipse, or, From the Toil of the Sun). Like the sun he came out of the East (Poland).

10. Peter the Roman - This Final Pope will likely be Satan, taking the form of a man named Peter who will gain a worldwide allegiance and adoration. He will be the final antichrist which prophecy students have long foretold. If it were possible, even the very elect would be deceived. The 112th prophesy states: "In the final persecution of the Holy Roman Church there will reign Petrus Romanus, who will feed his flock amid many tribulations; after which the seven-hilled city will be destroyed and the dreadful Judge will judge the people. The End." 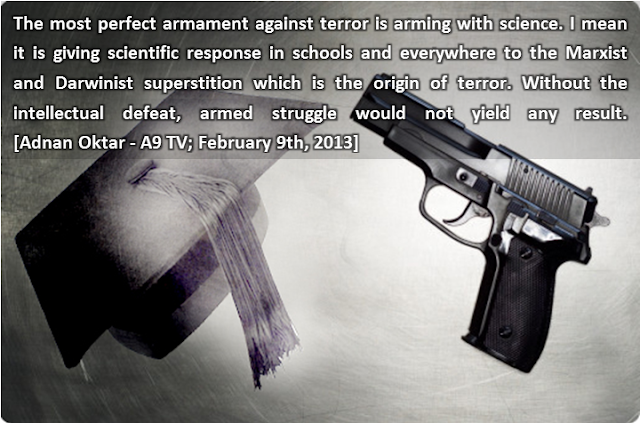 Adnan Oktar: The most perfect armament against terror is arming with science. I mean it is giving scientific response in schools and everywhere to the Marxist and Darwinist superstition which is the origin of terror. Without the intellectual defeat, armed struggle would not yield any result.  (A9 TV; February 9th, 2013)
By Faisal Farooq - February 11, 2013 No comments:

In the alliance of faiths, there is no acceptance of other religions

In the alliance of faiths, there is no acceptance of other religions 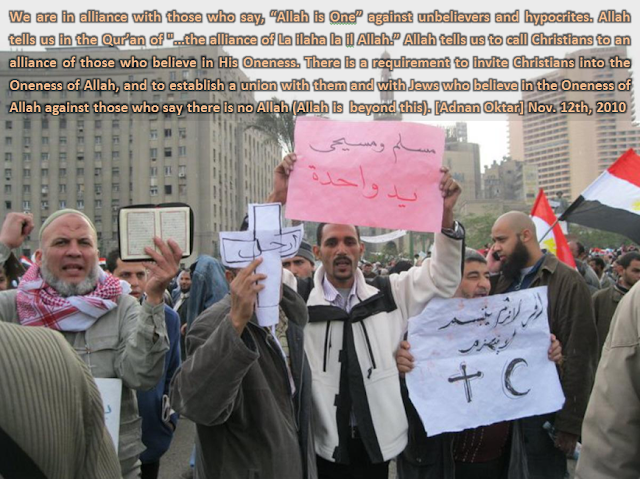 Harunyahya.TV,  November 12th, 2010
Adnan Oktar : Islam is the true faith in the Sight of Allah. That is an absolute fact set out in this verse. In the alliance of faiths, there is no acceptance of other religions. A Muslim cannot say that someone who becomes a Christian will be saved. Is that not how it was in the time of our Prophet (peace be upon him)? Islam was the true faith, and it reigned, but there was an alliance with Christians. They could eat food cooked by Christians and marry their women.We are in alliance with those who say, “Allah is One” against unbelievers and hypocrites. Allah tells us in the Qur’an of "...the alliance of La ilaha la il Allah.” Allah tells us to call Christians to an alliance of those who believe in His Oneness. There is a requirement to invite Christians into the Oneness of Allah, and to establish a union with them and with Jews who believe in the Oneness of Allah against those who say there is no Allah (Allah is  beyond this). We see this in the Qur’an and the hadiths, and Bediuzzaman also says this. But the armies of satan, atheist Freemasons who prepare the Greater Middle East Initiative, plan to eliminate Muslims from the inside by causing some ignorant Muslims to disregard the godlessness that prevails across 99% of the world, by killing those who would support a global struggle against the system of the anti-christ by saying “Allah is One” and by dividing Muslims. Our brothers must not be taken in by this scheme of the ignorant. They must avoid becoming a piece of dirt in the hand of the anti-Christ.
By Faisal Farooq - February 07, 2013 No comments:

Allah informs us in the 44th verse of Surat Az-Zukhruf that we will be questioned only about the Qur'an. The abjad value of this verse is 2013

Allah informs us in the 44th verse of Surat Az-Zukhruf that we will be questioned only about the Qur'an. The abjad value of this verse is 2013 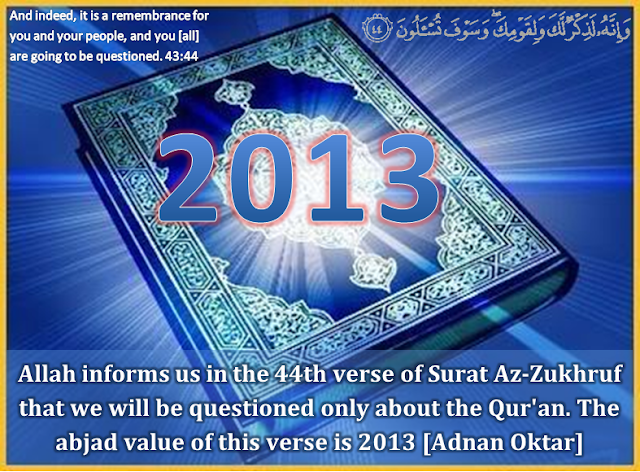 ADNAN OKTAR: I seek refuge with Allah from the satan. Surat Az-Zukhruf verse 44. "Verily, the Quran is  a reminder to you and to your people.." Masha'Allah ".. and you will questioned about it." Allah says "you will only be questioned about the Qur'an.  The abjad calculation of this verse that I always recite, that I always explain, gives the date 2013. That means in the year 2013, the sufficiency of the Qur'an will be spoken about loud and clear. That means the year 2013 will be the year of the Qur'an. There is an indication to that. Insha'Allah.

The salvation of Mali lies in the Unity of Islam.

The salvation of Mali lies in the Unity of Islam. 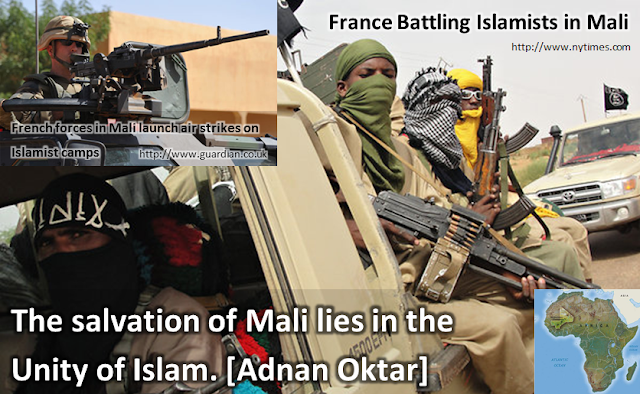 After Dhu’l-qarnayn and Prophet Solomon (as), Allah promises a 3rd world dominion to His sincere servants in the End Times.

After Dhu’l-qarnayn and Prophet Solomon (as), Allah promises a 3rd world dominion to His sincere servants in the End Times. 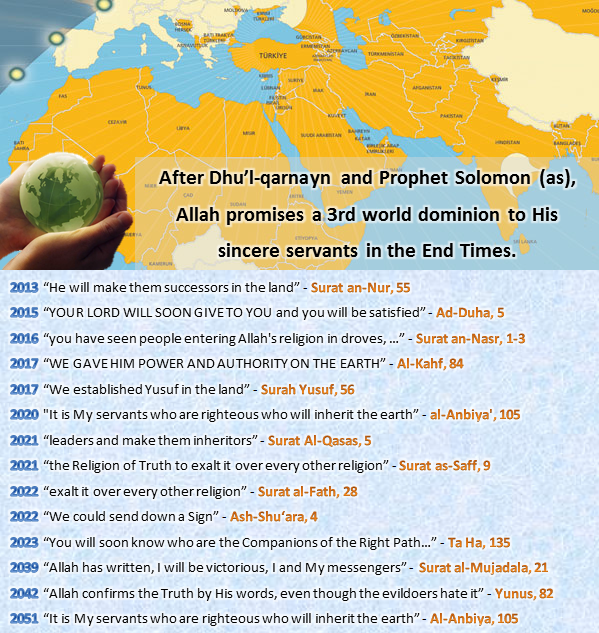