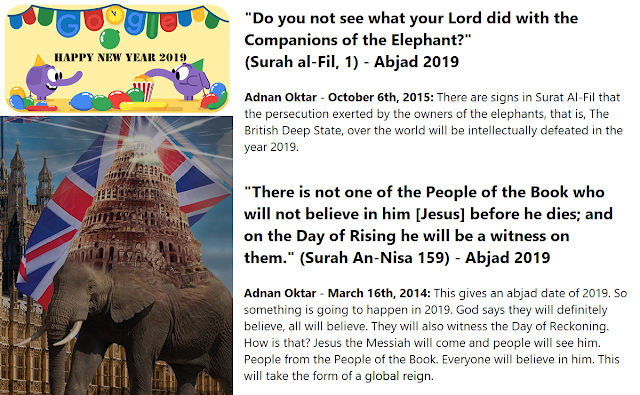 Adnan Oktar - October 6th, 2015: There are signs in Surat Al-Fil that the persecution exerted by the owners of the elephants, that is, The British Deep State, over the world will be intellectually defeated in the year 2019.

"There is not one of the People of the Book who will not believe in him [Jesus] before he dies; and on the Day of Rising he will be a witness on them."
(Surah An-Nisa 159) - Abjad 2019

Adnan Oktar - March 16th, 2014: This gives an abjad date of 2019. So something is going to happen in 2019. God says they will definitely believe, all will believe. They will also witness the Day of Reckoning. How is that? Jesus the Messiah will come and people will see him. People from the People of the Book. Everyone will believe in him. This will take the form of a global reign.

We are resisting time very well. I resist time well. I have never deviated from my objective of 1979. My determination has not wavered. 1979-1989-2009. And 2019. 2019 is the year of relief. Of course it will be a year of scourges and afflictions, but they will come to an end. It will be the date of the surrender of the system of the antichrist, insha’Allah. The system of the antichrist has a life span of 40 years.....

We are also moving through time. We will see who comes and who goes in 2019. We will see how the world is shaped. By God’s leave we will remain standing tall. Many people will go and many will remain. We will further our cause with great passion and zeal.

"AND ALLAH SHALL DELIVER THOSE WHO GUARD (AGAINST EVIL) WITH THEIR ACHIEVEMENT; evil shall not touch them, nor shall they grieve."
(Surah az-Zumar, 61)

Allah shall deliver those who guard (against evil) with their achievement ….

"That [is so], and [also] that Allah will weaken the plot of the disbelievers."
(Surah Al-Anfal, 18)

See Also:
- Owner of the Elephants
- Secret servants shape the course of history
- Numerological calculation [Abjad] dates concerning Prophet Jesus (pbuh) and referring to our own day
- God creates both good and evil in this world; yet in paradise there is peace and tranquility

Owner of the Elephants

OWNERS OF THE ELEPHANTS 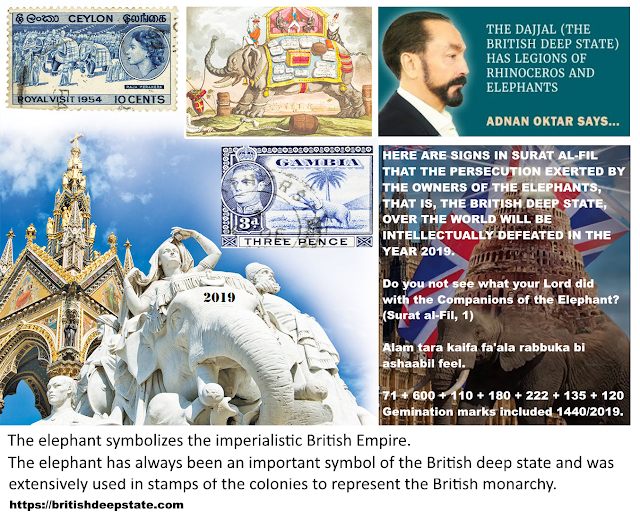 The elephant symbolizes the imperialistic British Empire. The elephant has always been an important symbol of the British deep state and was extensively used in stamps of the colonies to represent the British monarchy.

Adnan Oktar - 6 Ekim 2015. THERE ARE SIGNS IN SURAT AL-FIL THAT THE PERSECUTION EXERTED BY THE OWNERS OF THE ELEPHANTS, THAT IS, THE BRITISH DEEP STATE, OVER THE WORLD WILL BE INTELLECTUALLY DEFEATED IN THE YEAR 2019

Adnan Oktar - 20 Kasım 2014. 2019-2021 are the years the system of the antichrist will withdraw and collapse. But the years in between are the years of disaster. I have told the Freemasons as well, I have told them that this bloodshed would not stop, that it will continue. I would have said so if it were to stop but it will come to an end after a while. People will have to endure this, not by getting sad but by submitting themselves to God.

Adnan Oktar - According to the signs in the hadiths and verses of he Qur’an, the year 2019 will be a very active year. In 2022, there will be a state of peace beginning. After that the golden age will come by God’s leave.


THE ELEPHANT IS ONE OF THE SYMBOLS THE BRITISH DEEP STATE USES. THEY USED ELEPHANTS IN THE MASSACRES THEY CARRIED OUT DURING THE SECOND WORLD WAR


The British used elephants during the Second World War, just like the army of Abraha, they used them against Muslims.


In the name of God, All-Merciful, Most-Merciful.  I seek refuge in God from the satan: "Do you not see what your Lord did with the Companions of the Elephant? Did He not bring all their schemes to nothing?” [Surat Al-Fil, 1-2]


The British Deep State uses these symbols extensively. You can also find the elephant symbol in Masnavi; an elephant symbol is depicted there. It is depicted as an elephant moving in the dark as humans couldn't notice it. They bring the elephant into a barn, someone touches the elephant's ear, someone to its leg but none of them realizes it is an elephant. One of them says "it is a table", others say different things but in the end people couldn't realize that it is an elephant. Just like how they also couldn't notice or find the British Deep State, isn't it? Even though the elephant is inside, because they only see its small parts and not the whole animal, they don't notice. There, it is explained metaphorically, but those who can, can still understand it. The British Deep State interprets it this way. "We are like an elephant, but you can't notice us. Even though we are in different places, some people take us for a table, some people a chair, and others completely different things, but in the end you can't see us." They have that mentality.
2017-03-27 00:56:47
By Faisal Farooq - December 17, 2018 No comments: