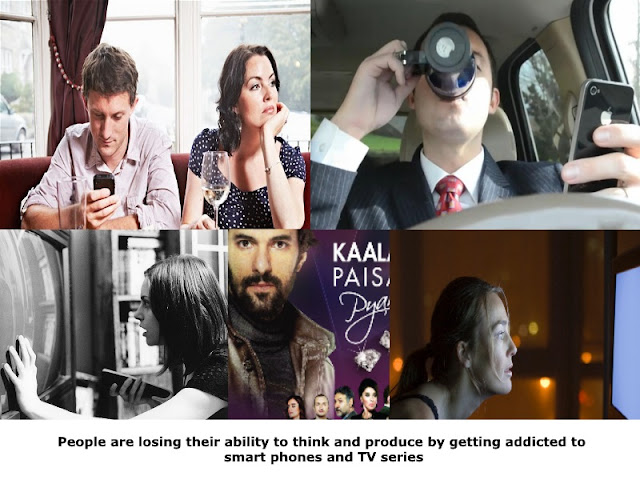 ADNAN OKTAR: Sometimes when I go out, I see young girls with a cigarette in one hand and a phone on the other. They are glued to their phones and they go on and on. What is this never ending phone talk? And when they are not talking on the phone, they are constantly surfing the internet; it’s like the phones are now their best friends; a handheld friend. It seems like their whole world are now their phones. And some telecommunication companies encourage this behavior with special offers like "it is free if you want to call your grandfather", "you will win a lottery if you call your aunt". People should use the phones when it is necessary. I rarely use my phone and when I do, I do it’s not a huge deal. I don't see why a phone conversation should drag on. If it is a person you love, then meet them and talk face to face. What is it that you talk about for hours on the phone? For instance they call their families and talk for hours. What is it that cannot be solved? You are a smart person, you should be able to solve it in a few minutes. But somehow they cannot solve it, they drag on and on, "should we do it or not?". Just cut to the chase. They see each other talking to long on the phone [and begin to think it’s normal] telecommunication companies further encourage it with slogans like: ‘talk as much as you want, don’t miss this opportunity etc.’ When you act this way, of course people will do it.
Some people have now become almost addicted to their phones. Just like smokers, alcoholics, phone mania has emerged. And then there is the TV series mania. They do not even eat so that they don't miss their favorite show.  They drop everything, hold their breaths, put their lives on hold. They cancel  even their business appointments, cancel everything. This is wrong. It shouldn't be like this. They render people almost incapable of thinking through football games, TV series and phones. It is not done deliberately but this is the result. Many people cannot think as a result. Their vocabulary consists of only two hundred words at most. They have narrow perspectives. They cannot think about things, research a subject; and eventually become shallow. You see how most people on internet are unable to even say what they want to say; and they are angry at everything and anything. For instance, when there is a match between Turkey and Greece, they jeer at the Greek team. What are you jeering at? We have lived together like brothers and sisters under the Ottoman rule for hundreds of years, this is a country that is our friend and neighbor, what are you jeering at?
Is this how a friendship supposed to be, how love supposed to be? Why do you jeer? For example, this also happens at houses, daughters, sons sitting with phones in their hands, only interested in their phones. They spend all their lives either playing games or texting all the time. You are tormenting yourselves. Just stand up and get moving, do something nice. Read, research, move.  Even [when they have to] go to a hospital and take selfies there and share even those photos as if there is something entertaining about it. They take photos of their broken legs, broken ribs in encasement and share them. It is not right that they focus so much on this, so absorbed with this. They should take it a little bit easy. For example, when people go somewhere and see a beautiful waterfall, a nice car or beautiful scenery, they are only interested in taking a photo of it. "How should I take the photo?" they think. They do not sit and enjoy the view and reflect on it. They just take the photo and leave. Just admire its beauty for a while, right? Look at it from a believers point of view, say that "How beautiful is God's creation". They run and jump on the streets getting their photos taken when the feet is off the floor, so they look as if they are flying.  Sure it is nice, they do it to show their joy, but one shouldn't spend their life in that state of mind. A constant commotion, noise, state of fuss, an artificial joy; they shout at each other, laugh at redundant stuff; it is as if they are drunk. It takes time for them to become normal and calm again. The other day, two ladies came here and they were exuberant. And they kept riling each other up, making a commotion, bursting with joy. They could hardly calm down. On their second visit, I saw that they were calmer, more poised, more mature. Another bad side effect of phone addiction is that it causes a state of timidity, nervousness, misanthropy and withdrawal in one's soul. It is as if their only friends are their phones, a virtual friend.
By Faisal Farooq - February 11, 2016 No comments: