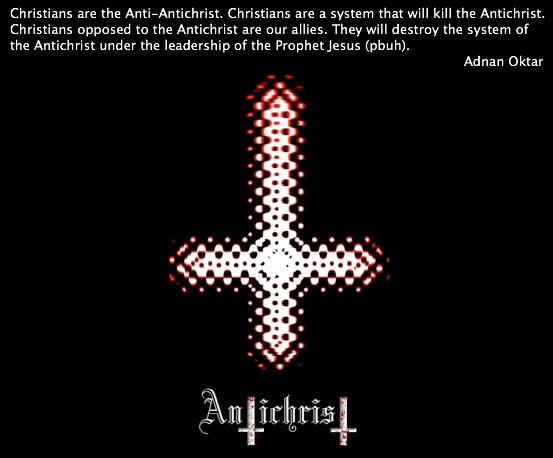 5:82 ...and you will find the nearest of them in affection to the believers those who say, "We are Christians." That is because among them are priests and monks and because they are not arrogant. Surat Al-Mā'idah (The Table Spread)

My teacher Adnan Oktar said Muslims and Christians should work together against materialistic system of antichrist (dajjal) like Darwinism, Communism, Fascism etc. Many Jews, Christians and Muslims who claim they are true believers but under influence of antichrist they are keeping hatred towards other believers in their hearts. Today some pictures published by Catholic.org made me upset as these pictures are being widely used to defame Islam and Muslims, and creating hatred towards Muslims in hearts of Christians. These pictures are published against terrorist organization ISIS but are exploded in hundreds of anti-Islamic websites and social media against Islam and Muslims. When I searched the source of these pictures then found about all of them are fake or irrelevant. ISIS has committed plenty of murders of their political opponents including Muslims (both shia and sunni), and destroyed shrines and mosques but it is not true they are only targeting Christians and they are systematically beheading Christians. Preparing and publishing these fake pictures by Catholic.org is showing they are also influnced by antchrist who want Armagadon in this region which is the region of holy Prophets (pbut). 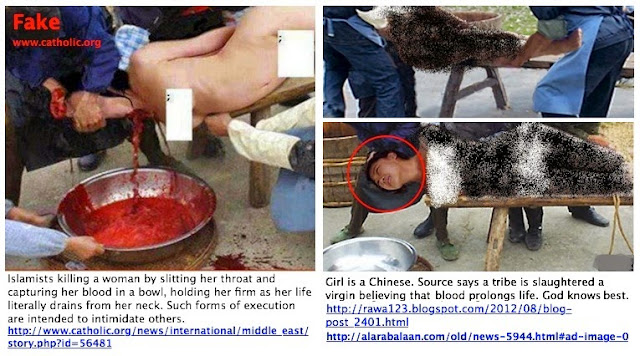 I don't know this picture is scene of a horror film or not but this girl is Chinese. The girl in the picture is Chinese. Why Islamists (Muslims) will kill a chinese girl in Syria? Also look dress and shoes of Islamists :)....

ISIS is misguided but they believe in God and His prophets like Christians. Islam teaches respect of women. Role model of all Muslims is mother of Prophet Jesus Christ (pbuh).

In this picture Catholic.org calimed Islamists are killing childrens because they are Christians. Reality is the innocent girl in the picture of Fatima who is killed by army of a tyrant. When a bomb of a tyrant strikes a building then it kills all people including Muslims, Christians, atheists and also childrens, just like drone attacks. 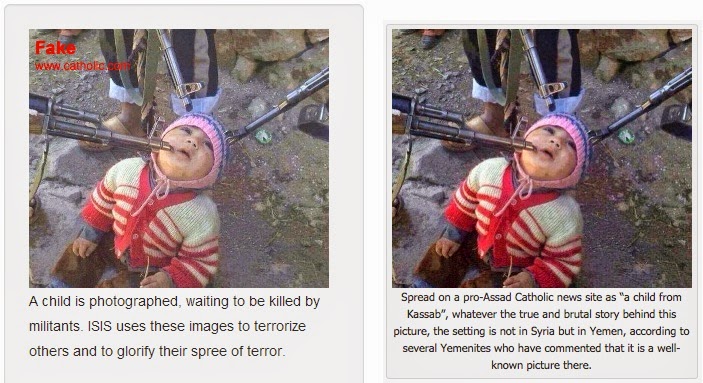 Above is Yemeni child....

These kids are not Christians and not belonged to Mosal but Damascus. They are affected by a car explosion which cannot also distinguished between Christians and Muslims like drones attacks.

This innocent women is not killed for being Christian but she is a Muslim professor who is killed for raising voice against falsehood.

Who are ISIS? Are they representing Islam? What we can done against ISIS?

ISIL commits violence on the basis of false hadiths in the same way that the Christian Crusaders misinterpreted the Bible:
http://pakistan-harunyahya.blogspot.com/2014/10/isil-commits-violence-on-basis-of-false.html

Adnan Oktar: The best thing to be done against ISIS is to explain the truth with love, science and wisdom. That is because these people believe in God yet they are trapped in idolatry; this idolatry drags them into committing murder. They have been misinformed. If you correct that mistake, the whole issue would then be solved.
Adnan Oktar: Idolatry brings ruin to people. It drags them into committing murders, killing people and even killing themselves, burning and destroying their surroundings. But once those people are saved from idolatry they become a radiant, luminous people. And that will be made possible by Imam Mahdi (pbuh), insha'Allah.
(A9 TV; October 19th, 2014)

There is no such thing as good killing:
http://pakistan-harunyahya.blogspot.com/2014/10/there-is-no-such-thing-as-good-killing.html

Why these fake pictures are being used and circulated against Islam? Is it preparation of Armageddon and dividing Iraq, Syria and Turkey by antichrist?

Adnan Oktar: We know that America wants a Kurdistan to be established and the Kurds are separated. But it does not want this for the benefit of the Kurds. Evangelicals believe that a big war needs to take place. They believe that there should be an Armageddon. Therefore, they have a belief that there will be a state there, that Israel will dominate the region completely, a big state that covers the cities in Southeast like Batman, Siirt and Diyarbakir, but there will be a Kurdish state; then communist Kurds will be eliminated and then Israel will come to the region and they will kill the Israeli people, so only one hundred and twenty thousand Jewish people will be left, and the others will be killed. Within this context, they want to misuse my dear Kurdish brothers and sisters. We will not let this. America does not like it because they are Darwinists and materialists. What happens when one is Darwinist and materialist? They say, “Turks are a transitional form”. They say, “They are a transitional form that did not complete its evolution”. They say that Turkish people are “Unevolved animals”. The European Union says the same thing. How could a person love another at first sight? Of course he could not.

Those who want to arm the PKK and break Turkey up are planning Armageddon in the region: 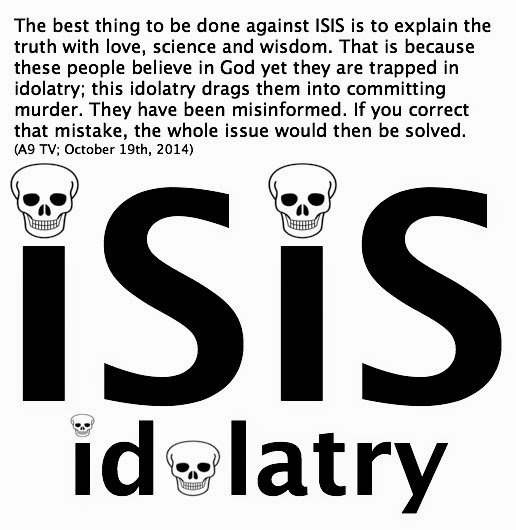 The best thing to be done against ISIS is to explain the truth with love, science and wisdom. That is because these people believe in God yet they are trapped in idolatry; this idolatry drags them into committing murder. They have been misinformed. If you correct that mistake, the whole issue would then be solved.


Idolatry brings ruin to people. It drags them into committing murders, killing people and even killing themselves, burning and destroying their surroundings. But once those people are saved from idolatry they become a radiant, luminous people. And that will be made possible by Imam Mahdi (pbuh), insha'Allah. 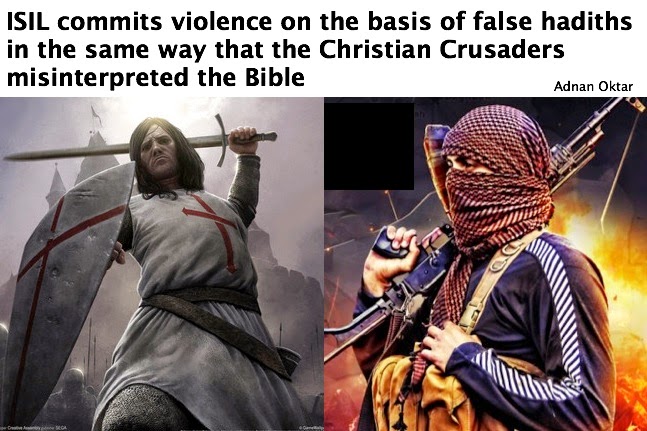 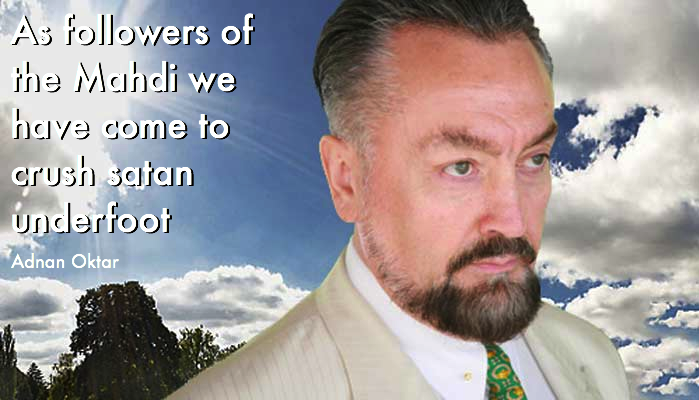 Excerpt from Mr. Adnan Oktar's Live Conversation on A9TV dated October 17th, 2014
A viewer responded as follows to my saying that we want a world with no bloodshed or weapons; ‘There is no such world. God has created us all with different faiths and languages so there should not be too much preponderance, so that human beings should argue with and fight one another.’ He says that God has created people to fight one another. So why is there no fighting in paradise? Because everyone has submitted to God. Everyone has gone through training [in the world] and has been educated. With education, people go to paradise and live perfect lives. This world, too, can be like paradise if you educate people and teach them the moral values of paradise. But if satan is your teacher, of course you will adopt satanic ways, and you will burn, destroy and kill. We have come to the world to vanquish satan. We will vanquish satan in this century. We will personally slay him beneath our feet. That is why we have come to this world, it is our duty.
- Teacher, we all come from different cultures here. Yet with your education we think of nothing negative.
Adnan Oktar: Is it a good thing for people to kill one another, or to love one another? Satan says that killing is good. God, however, says that love is good. We heed the word of the Qur’an.
- God says that He created different peoples so they could come to know one another.
Adnan Oktar: of course. God does not command us to slaughter one another. The first murder appears in the story of Cain and Abel, as you know. A verse tells us that murder was made to seem attractive to him. Satan is making killing seem attractive to people now. But we will slay satan beneath our feet. That is our duty. That is why we came to this world as followers of the Mahdi.

There is no such thing as good killing 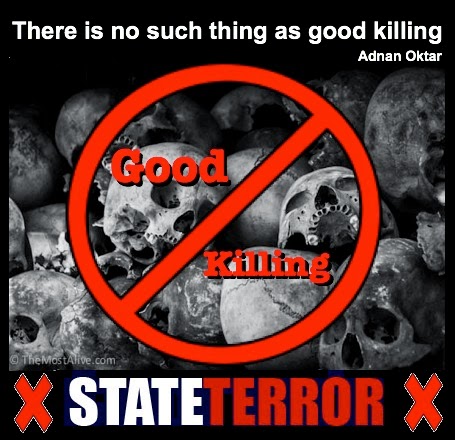 Excerpt from Mr. Adnan Oktar's Live Conversation on A9TV dated October 10 th, 2014
Adnan Oktar: There is no question of Turkey supporting the Muslim Brotherhood. Turkey only supports Muslims. Turkey is not hostile to the other half of Egypt. We love them all very dearly. We also feel affection for the Muslim Brotherhood. We have no special approach to them. We also feel sorry for groups in Palestine. We see their violent aspects. We do not encourage that. But they are our children, so what can we do? At most, we can educate them. But you are saying let’s kill them. That means you are engaging in state terror. They throw bombs by hand, you drop them from planes. What you do is worse, because it is more wide-ranging. They kill 10 people, but you kill 100,000. Two million people have been killed in Iraq alone. More than 2.5 million have been slaughtered in parts of Asia. The number of Muslims martyred by America in Afghanistan is about 3 million. Is that not? That is state terror. If you say you can kill, the other side will say it can kill, too. You must do away with killing. You must do away with bloodshed and weapons. There is no good or bad killing. They say they are doing good killing. The other side would then say theirs is ‘good killing.’ There is no good killing. Killing is bad. You must not use weapons. You must not accept bloodshed anywhere. You must not allow one drop of blood to be spilled. You must not waken the sleeper.
There is all this turmoil in the world because we are living in the time of Moshiach, the Mahdi. IS say they are a movement of the Mahdi. Iran also says it is a movement of the Mahdi. Iran has an army of the Mahdi of 1 million members. They all march instep and shout ‘Mahdi’ at every step. The belief in the system of the Mahdi is everywhere in the region. So much for there being no system of the Mahdi! So the hadiths are right. They tell me not to talk about the hadiths. But not talking about them will not change anything.