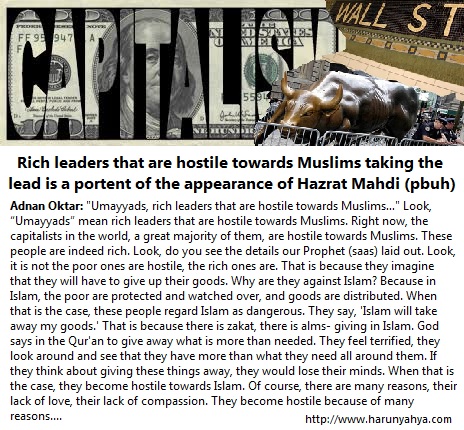 Adnan Oktar: "Umayyads, rich leaders that are hostile towards Muslims…" Look, “Umayyads” mean rich leaders that are hostile towards Muslims. Right now, the capitalists in the world, a great majority of them, are hostile towards Muslims. These people are indeed rich. Look, do you see the details our Prophet (saas) laid out. Look, it is not the poor ones are hostile, the rich ones are. That is because they imagine that they will have to give up their goods. Why are they against Islam? Because in Islam, the poor are protected and watched over, and goods are distributed. When that is the case, these people regard Islam as dangerous. They say, 'Islam will take away my goods.' That is because there is zakat, there is alms- giving in Islam. God says in the Qur'an to give away what is more than needed. They feel terrified, they look around and see that they have more than what they need all around them. If they think about giving these things away, they would lose their minds. When that is the case, they become hostile towards Islam. Of course, there are many reasons, their lack of love, their lack of compassion. They become hostile because of many reasons.

"When the Umayyads (rich leaders that are hostile towards Muslims) rule … Their state remains strong and they live at ease and wealth" That means while capitalism rules with all its fierceness. Now look at the details our Prophet (saas) gives. "Their state remains strong and they live at ease and wealth until they disagree among themselves." For instance, the Ottomans remained strong, many other countries remained strong, but: Afghanistan remained strong, Iraq remained strong, but when they disagree among themselves, when Muslims started struggling against one another, what happens? "THEN THEIR STATE WILL DECLINE AND THE PEOPLE OF THE EAST AND OF THE WEST WILL DISAGREE." When the people, that nation starts disagreeing among themselves. Saying you are Sunni, you are Shia, you belong to that or this, you are from the parallel organization, etc. What happens? "Their state will decline." May God forbid. "People will face difficult times full of terror." Our Prophet (saas) says this. Is this happening right now? It is happening. "They will remain so until a caller calls out from the Heavens." This caller is the Mahdi, his voice heard from the television. "When you hear the call, you are to hurry up (to join the Qaim)" the Mahdi. 'Do not drag your feet,' says our Prophet (saas). 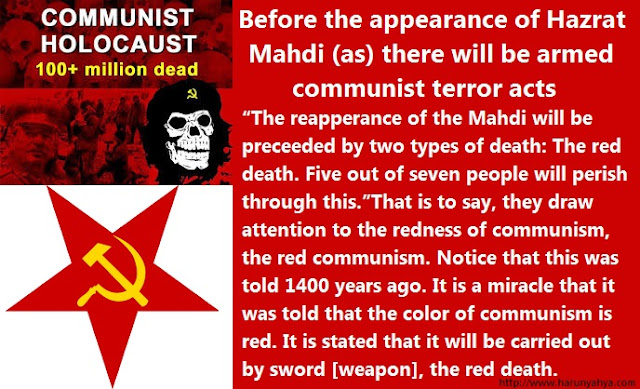 “The reappearance of the Mahdi will be preceded by two types of death: The red death. Five out of seven people will perish through this.”That is to say, they draw attention to the redness of communism, the red communism. Notice that this was told 1400 years ago. It is a miracle that it was told that the color of communism is red. It is stated that it will be carried out by sword [weapon], the red death.

Hazrat Mahdi (as) will appear in the appearance of the red star. Zevra will be ruined.

The perfect Design of Allah behind pruney fingers and toes 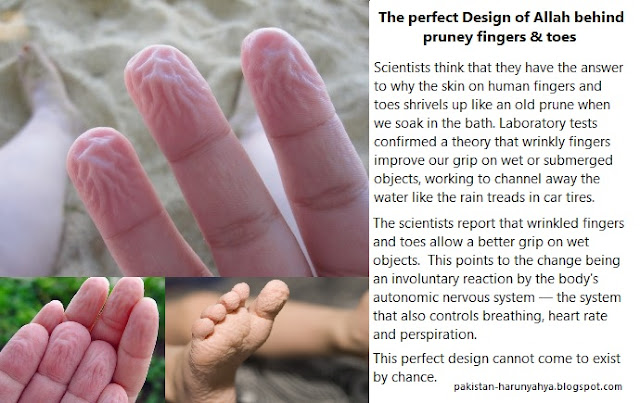 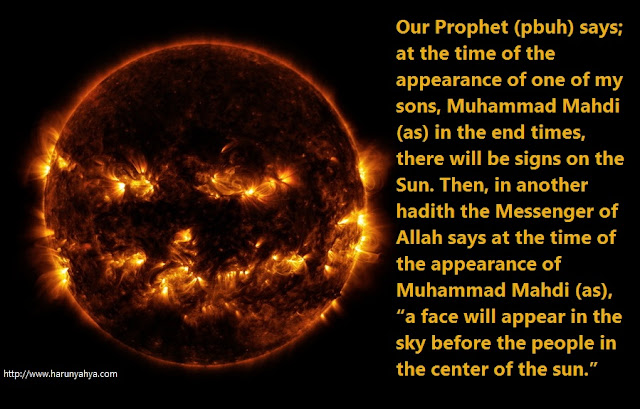 NASA discovered this in 2014 and when this face appeared on the Sun, the news was spread throughout the media and televisions. This extraordinary happening was serviced to official news agencies and the entire world witnessed it. Everyone saw it, and we are seeing it now.
Just zoom into the photograph, and show its eyes, mouth and nose. Now, NASA stated “a terrifying face appeared,” and after that “a smiling face appeared.” Look at its mouth, reaching the ears with a smile and the eyes. Do you see that the eyes are shining? The pupils of the eye are evident in great detail. The mouth and nose are apparent, and it has the form of a human face. Let us see the eyes closer, the brightness in the eyes is so obvious, don’t you recognize? Its eyes are quite normal, just like the eyes of sheep. Zoom into the eye closely, very closely, and do you see now? It is shining like the eye of a normal human being insha’Allah. In Kitab al-Irshad, page 541-542 and many other sources. I am just giving reference to only one of the sources. Let me say that they cannot overcome Mahdi (as).

1,400 years ago, our Prophet (saas) foretold the name of Assad

The risings of Sufyani and Khurasani 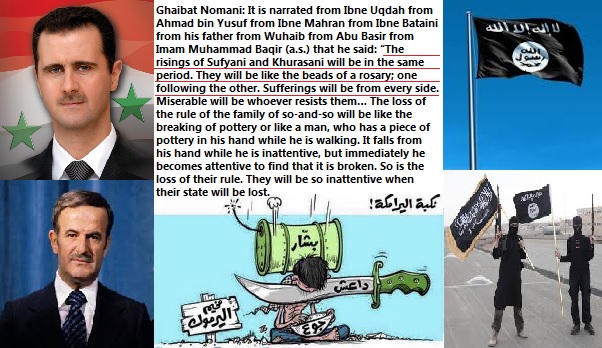 96- Ghaibat Nomani: It is narrated from Ibne Uqdah from Ahmad bin Yusuf from Ibne Mahran from Ibne Bataini from his father from Wuhaib from Abu Basir from Imam Muhammad Baqir (a.s.) that he said: “The risings of Sufyani and Khurasani will be in the same period. They will be like the beads of a rosary; one following the other. Sufferings will be from every side. Miserable will be whoever resists them… The loss of the rule of the family of so-and-so will be like the breaking of pottery or like a man, who has a piece of pottery in his hand while he is walking. It falls from his hand while he is inattentive, but immediately he becomes attentive to find that it is broken. So is the loss of their rule. They will be so inattentive when their state will be lost. 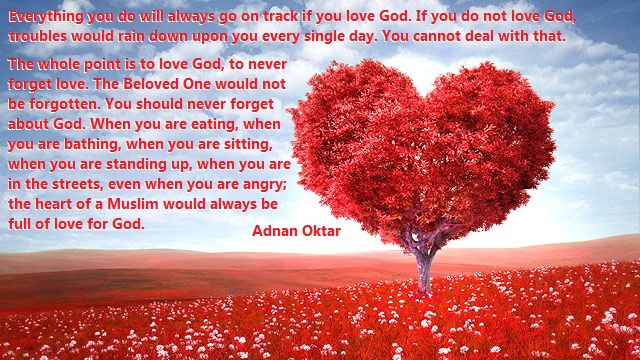 Everything you do will always go on track if you love God. If you do not love God, troubles would rain down upon you every single day. You cannot deal with that.

It has nothing to do with showing a lot of effort. The whole point is to love God sincerely; to love God with a deep, profound love. If you love God, you are strong. I mean if you love God a lot, you would definitely be victorious. Look I am not saying that “if you believe in God”, I am saying “if you love God”. Actually to feel love, you have to believe in Him.

In 1993, The Independent presented Osama Bin Laden as if he were a dove of peace 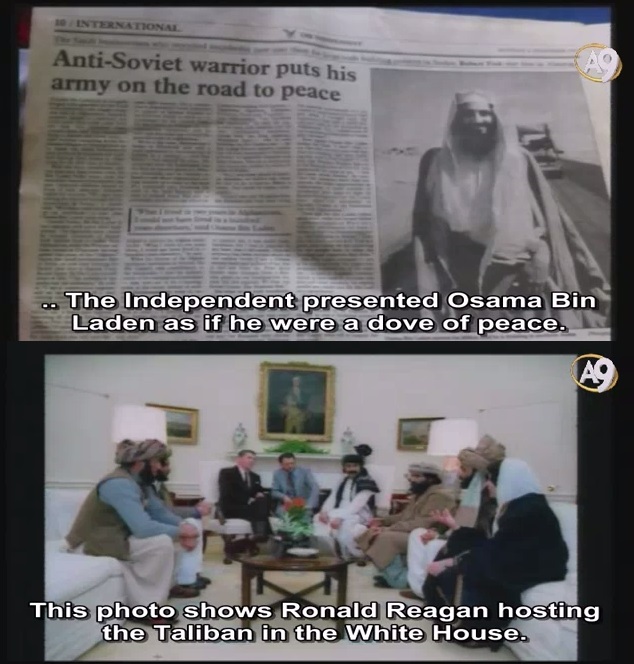 ADNAN OKTAR: There is a news article about Osama Bin Laden, do you have that?

BÜLENT SEZGİN: I have the photo of the article.

ADNAN OKTAR: Alright. Do you have its annotation?

BÜLENT SEZGİN: No, I don't. Let me ask about it.

ADNAN OKTAR: Let them send you the annotation as well.

BÜLENT SEZGİN: I received the annotation. I can read it now

BÜLENT SEZGİN: If they can show the photo...

ADNAN OKTAR: Do show it.

BÜLENT SEZGİN: In 1993, in an article with the heading "Anti-Soviet warrior puts his army on the road to peace" The Independent presented Osama Bin Laden as if he were a dove of peace.

ADNAN OKTAR: We have found this, with this picture three months ago, while we were researching in the archives. We were keeping it aside thinking that we can use it in our books. That is a very interesting document. Show it once more.

BÜLENT SEZGİN: In 1993, in the article with the heading "Anti-Soviet warrior puts his army on the road to peace" The Independent presented Osama Bin Laden as if he were a dove of peace.

ADNAN OKTAR: See that they were in complete unison back then. Later on they  presented him as a terrorist.

BÜLENT SEZGİN: There was another photograph.


ADNAN OKTAR: Supposedly they are fiercely against them but here they get on like a house on fire. They are getting along just fine.