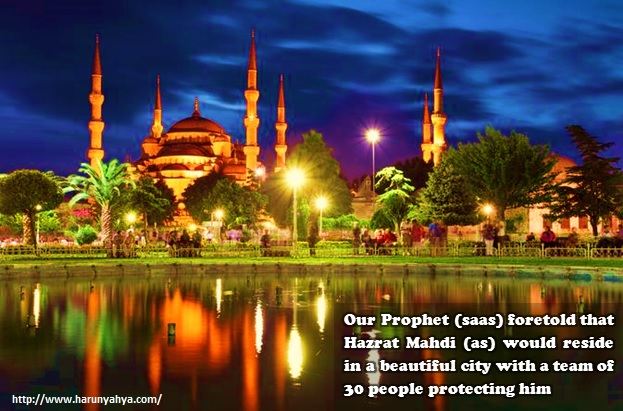 “The owner of this issue, Imam Mahdi, will go through a period of isolation. During this time of isolation when he will need protection and power, he will be accompanied by 30 people, so that no harm will come to him.” So Mahdi will have guards. A team of 30 guards. This is a miracle. Notice that it will be made up of a group of young people. “For them what a beautiful residence is Medina (the City).” There is reference to Istanbul here. How nice; it is related that it is a beautiful place. The abjad calculation is 1453. Bihar al Anwar, Volume 52, page 153, Hadith 6. It is said that the number of his guards will be 30, but in order to accentuate the beauty of the place, the city in which he lives, it is said, “What a beautiful residence is Medina.” Of course, this team is made up of males and females, for the hadith relates it so.

“Narrated from Abdullah bin Amr: He said: “In the time of Hazrat Mahdi (as), such a time will come upon people that a person will want to get on a boat with his family and flee,” as you see the situation of the Syrian refugees is told by our Prophet (saas),  “but the trouble they face within the waves of sea becomes more severen tan the one on land.” While they don’t face such a danger when they are on land, with the sinking of the ship or the boat, they will drown. That would be more severe, it is told. Nuaym bin Hammad, Kitab Al Fitan, Hadith. 1294

ISIS crashed down a Jordanian warplane on 24th December 2014. Do you recall that? The Jordanian pilot Muath Youssef al-Kasasbeh was taken as hostage. And on 3rd February 2015 that pilot was executed by being burnt to death. Upon this incident, the Jordanian King Abdullah broke short his visit to America and decided to go back to Jordan.

This young man who was burnt is a member of the al-Kasasbeh family which is one of the prominent families in Jordan of the Bararsheh tribe. The father of Muath al-Kasasbeh is a professor and his uncle was a Major General in the Royal Jordanian Army. Therefore, the capturing of this young pilot shook entire Jordan as it was a very significant happening in the Jordanian army.

And as you know, how the young was burnt to death was video recorded by ISIS.

Our Prophet (pbuh) gave all the details of this occurrence and this is given in Bihar al-Anwar, volume 51, page 116.

(Another sign of Mahdi (as)’s appearance is) “A man of important rank of the supporters of the Abbasides,” these are the Hashemites, the Arab army, the Abbasides. And a young man from that lineage, of important rank, “will be burnt between Jalula and Khaniqin.” See that at the time of Mahdi (as), a young man from this army is burnt to death and God discloses this in great detail. Since, they found that to be a very eminent happening. The reason is that they do not burn people in general, but either slaughter or shoot them.

Yes, you know that they burnt him in a cage. From the Abbasides, the army of the Arabs, this is a man of important rank and he is burnt between Jalula and Khaniqin. Our Prophet (pbuh) even spells out the location and states that he will be burnt to death. This reference is 1200 year dated, and the event is narrated in volume 51, page 116. The Messenger of God (pbuh) has put into words the map of all occurrences. 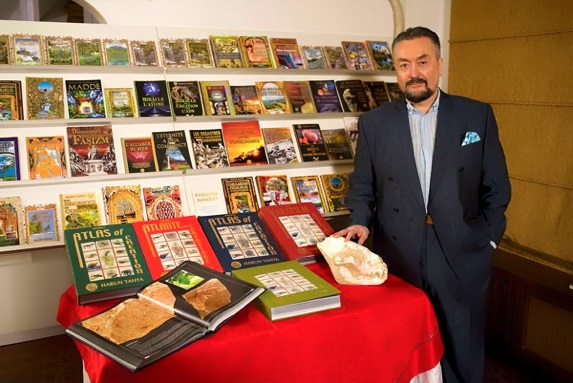