When death is not the end

SOME sayings work for millions of people in the world, no matter what language they are spoken in. Carpe diem is definitely one of these. But how correctly is this saying by Horace perceived today?

Carpe diem, in fact, means that one should be aware that death can come at any moment and, therefore, you should value each and every second. What the famous poet meant when he said, “In the moment of our talking, envious time has ebb’d away. Seize the present; trust tomorrow e’en as little as you may”, was that the life of this world is very brief, and that sooner or later, we will return to the earth.

Yet today, this concept is regarded as encouraging a philosophy of hedonism and meaning “live for today, have fun, and forget about tomorrow”.

As one can see from their lifestyles, speech and behaviour, a great many people today really choose to live as if they were not going to die and elect to make maximum use of the benefits of this world; indeed, death is what these people care to think about least.

Never mind thinking about death, they do not care even to remember it. When a friend or someone they know dies, they are utterly devastated. Facing the fact that they, too, will one day die literally makes them sick, inflicts upon them a psychological breakdown and makes them unable to take any pleasure from anything.

The reason why they are so afraid of death is that they regard it as the end and imagine they will cease to be after they die. They, therefore, seek a solution in living as if they will never die.

But the true face of the life of this world is always at their heels and makes its presence felt at every moment, despite their wishes. Although they wish never to grow old or sick, and to remain forever young and healthy, their youth departs in a few brief decades, and they become afflicted by sickness.

Even the most perfect and healthy-looking person inevitably grows old and dies. Thousands of deaths take place every day. The roads are filled with cemeteries. The people buried just a metre or two apart once ate in restaurants, watched television, went to the movies, took photos with their loved ones on their travels and made plans for the future, but these things lost any significance when they died.

The surprising thing is that those left behind are themselves keenly aware of all this but their devotion to this world never decreases, and they continue chasing after the things of this world even though they are, step by step, day by day, drawing closer to death.

Yet, death is one of the greatest realities of all. It is foolish to disregard that reality and forget that life is brief and death can come at any time. Death may come when you never expect, and everything that one has acquired in this world, property, possessions and rank, will be left behind.

Nobody will be able to take his wealth, rank, prestige or anything else into the hereafter. A person enters the grave with his body, clad only in a shroud, and even that soon begins to decay.

In short, death is an inescapable fact. Living in the knowledge of that fact bestows the most agreeable attributes upon a person.

One has a clear and sharp mind: Someone who knows that everything and everyone in this world is finite, and that death can come at any moment, first and foremost has a high level of awareness. He begins purging himself of the transitory desires of this world and of feelings of the lower self. He begins to realise his own weakness. Someone who grasps his own weakness becomes more virtuous, more tolerant, more forgiving and more conciliatory.

He becomes more loving, compassionate and affectionate. He becomes altruistic and humane and thinks of others’ comfort rather than his own. Most importantly, he begins seeking the purpose of life and becomes aware of the extraordinary order that pervades the universe.

On the other hand, he sees the blessings he possesses and realises that it is God Who bestows them all. As he comes to know God, he begins to realise that life is not only the brief span allotted here; he comes to recognise that God, Who created this world, will also create an eternal life after death, and that this eternal life will start after death.

As we have seen, reflecting on death leads on to the true path. It enables a person to be someone who believes in God and knows that he has a soul, who knows that his purpose in this world is to serve God, that he has been sent into this world to be tested and that after that test he will have to account for himself in the hereafter.

For such a person, death is not something to be feared, but a means to come to our Lord, Who we love above all else and to Whom we are devoted with fervour and passion, and a doorway to eternity. Death is not the end, but rather the beginning of the real, eternal life.

The writer has authored more than 300 books, translated into 73 languages, on politics, religion and science.

Understanding The Concepts Of “Sharia” And “Jihad” Correctly 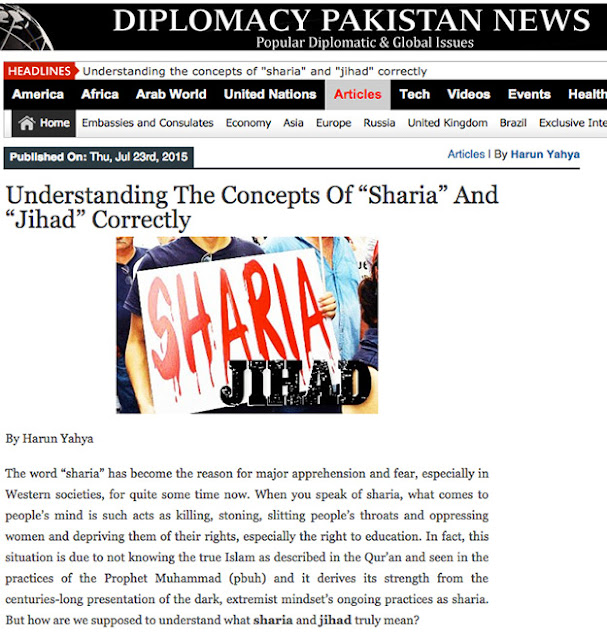