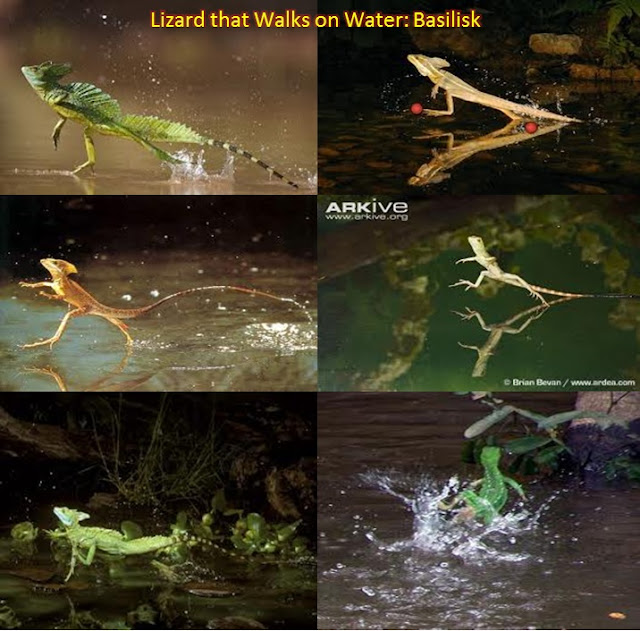 If someone talks about “walking on water”, you would think that he has a great imagination or that it could only be possible via illusions. This ability, which is so impossible for us, is a very common way of living for some living creatures.
There are living creatures that walk on water or stroll on the water surface safely without even realizing concepts such as buoyancy of water, laws of surface tension, weight, length and density.

This lizard called “ basilisk” which lives in Central America is one of the miraculous creatures that walks on water.
It jumps into water when it senses a danger,
It stands on its back feet on the water and begins to run on the surface of the water.
Its physics of running on water is very perfect.
And the secret of this miracle is in the cavities filled with air that forms underneath its feet as it runs.
Its feet have scaled whisks that momentarily captures air and prevents the animal from sinking.
Therefore, the basilisk walk on air instead of walking on water. The only thing it needs to do is to be as fast as it can to avoid the air package being ruptured until it takes the next step.
However, the basilisk reaches a speed of 12 kilometer per hour while running on water as if it knows this. And it can pass over a 40 meter long pool without sinking.
If the lizard does not withdraw its foot from the hole formed when it compresses its foot on water, its foot can sink. In order to pull the foot out of the water, the animal needs to overcome the bonding between the water and  its foot. Just as the animal pushes down, the toes on its foot are pulled up together with the foot. This means that when the animal pulls its foot from the hole with speed, only air is formed around it. For a human being to accomplish what is done by the basilisk lizard, he would need to run 104 km per hour and consume 15 times more energy than he normally does, which is quite impossible with current circumstances.
As it is seen, the basilisk can only stand with the help of detailed calculations. However, the basilisk lack the consciousness and intelligence to make such a calculation.
For example, it is a clear fact that it cannot calculate the grams of weight required so it can stand on water, the speed at which it can benefit from surface tension or the structure of its feet to ensure not getting wet, and that it cannot take the precautions related to these and make the required changes in its body.
However, if you ask the opinion of an evolutionist on this matter, they would tell you that blind coincidences might have given the basilisk such an ability. Of course, it is impossible that these illogical approaches explain the complex systems that require an order to work perfectly.
There is a clear plan and calculation here and this calculation belongs to Allah. And Allah reveals as follows in one verse:
... Every single thing is before His Sight. (Surat ar-Ra’d, 8)
2013-01-08 10:38:09
By Faisal Farooq - January 08, 2013

Email ThisBlogThis!Share to TwitterShare to FacebookShare to Pinterest
Labels: Creationism