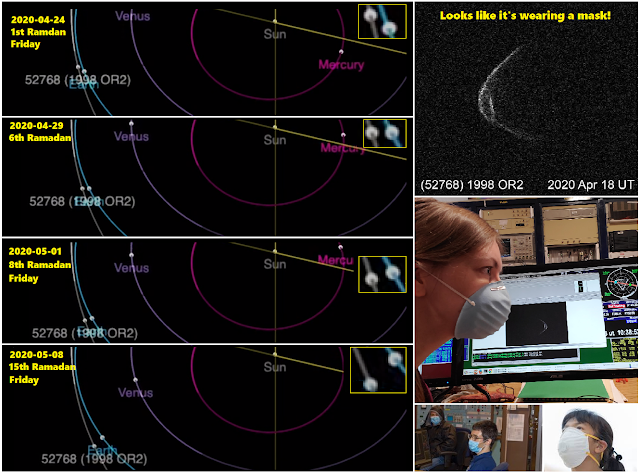 Shape of asteroid looks like it is wearing a mask is indicating epidemic COVID-19.

On Saturday (April 18), the Arecibo Observatory in Puerto Rico captured a radar image of the asteroid 1998 OR2, which will zoom within 3.9 million miles (6.3 million kilometers) of our planet on April 29.  We have nothing to fear from 1998 OR2 as it is passing 16 lunar distances from earth......

Asteroid 1998 OR2 and some portions of following two weak "ghareeb" hadiths are indicating signs of current COVID-19 epidemic, Insha'Allah and Allah Knows Best.

"it was narrated that Ibn Mas‘ood said: The Messenger of Allah (blessings and peace of Allah be upon him) said: “If there is a blast [NEWS ABOUT ASTEROID AND COVID-19 FROM SATELLITE TV] in Ramadan, there will be turmoil in Shawwaal, and distinguishing of the tribes in Dhu al-Qa‘dah, and blood will be shed in Dhu al-Hijjah, and what is Muharram? He will say it three times, what a bad thing will happen then. The people will be killed in it, in great numbers. [DEATH FROM COVID-19]” We said: What is the blast, O Messenger of Allah? He said: This will happen halfway through Ramadan on the night before Friday [FIRST AND 15TH RAMADAN ARE ON FRIDAY AND ASTEROID WILL BE NEAR IN THESE DAYS]. There will be a tremor [LOCK DOWN] that will wake the one who is sleeping, make the one who is standing sit down [SELF ISOLATION], and bring the young girls out of their seclusion, on the night before Friday, in a year when there will be a lot of earthquakes and severe cold. If that coincides with Ramadan of that year, on the night before Friday, then when you have prayed Fajr on a Friday in the middle of Ramadan [8TH MAY OR 15TH RAMADAN], go into your houses and close your doors, and block up your windows, and cover yourselves with blankets, and block your ears [SELF ISOLATION AND QUARANTINE]. Then when you feel the blast [NEWS], fall down in prostration to Allah [ASK FOR FORGIVENESS] and say: ‘Glory be to the Most Holy, glory be to the Most Holy, our Lord the Most Holy,’ for whoever does that will be saved and whoever does not do that will be doomed.”

“In Ramadan there will be a sound [NEWS].” They said: At the beginning of it or in the middle of it or at the end of it? He said: “No; rather it will be in the middle of Ramadan, if the night of the (fifteenth) is the night before Friday [8TH MAY OR 15TH RAMADAN]. There will be a sound from heaven [NEWS ABOUT ASTEROID OR COVID-19 FROM SATELLITE TV] because of which seventy thousand will swoon, seventy thousand will be struck dumb, seventy thousand will become blind, and seventy thousand will become deaf [AFFECT MANY PEOPLE].” They said: Who among your ummah will be safe? He said: “Those who stay in their houses [SELF ISOLATION AND QUARANTINE], seek refuge with Allah by prostrating, and say takbeer magnifying Allah out loud [FORGIVENESS AND CALL OF PRAYER FROM HOME]. Then it will be followed by another sound [ANOTHER NEWS ??]. The first sound will be the voice of Jibreel [TO TEST PEOPLE] and the second sound will be the voice of the Shaytaan [TO HARM PEOPLE ??]. The sound in Ramadan, the turmoil in Shawaal, the distinguishing of the tribes in Dhu al-Qa‘dah [FIGHT AMONG ARAB PRINCES], raids on the pilgrims in Dhu al-Hijjah [BAN ON PRAYERS AT MOSQUES]. And in Muharram: what is Muharram? The beginning of it is a calamity for my ummah and the end of it is joy for my ummah. A riding camel that a believer could use to escape turmoil will be better for him than fertile land and houses on that land that could yield one hundred thousand [ESCAPE FROM BIG CITIES AND BUSINESS AREA].”

"And Allah will save those who feared Him by their attainment; no evil will touch them, nor will they grieve." (39:61)

"Do you not see what your Lord did with the Companions of the Elephant?" (Surah al-Fil, 1)

"There is not one of the People of the Book who will not believe in him [Jesus] before he dies; and on the Day of Rising he will be a witness on them." (Surah An-Nisa 159)

"AND ALLAH SHALL DELIVER THOSE WHO GUARD (AGAINST EVIL) WITH THEIR ACHIEVEMENT; evil shall not touch them, nor shall they grieve." (Surah az-Zumar, 61)

"That [is so], and [also] that Allah will weaken the plot of the disbelievers." (Surah Al-Anfal, 18)